Not to be distributed in whole or in part for commercial purposes.

In the latter part of this century when modernism in the hands of its imitators became dogma rather than adventure, and academic literary criticism became politicized, the techniques of rhyme and meter, like the genres of narrative and dramatic poetry, fell into disrepute. Ludicrous as it may seem, both the techniques and genres were presented in these years as being reactionary and even un-American because they were linear and structured, uncongenial to the idiomatic speech and fragmentary nature of urban American life. I've addressed such a perspective at length with the anthology Expansive Poetry (Story Line, l989). What I'd like to do in this essay is focus on rhyme and show that it is not only compatible with idiomatic diction but can be an integral part of the dramatic poem whose essence is idiomatic speech. More importantly, I'd like to show that for the poet the particular uses of rhyme come not so much from historical determinants but from the demands of the genre the poet is working in. In the lyric and meditative poem, and those moments of dramatic poetry that are lyrical, rhyme helps develop the music, emotion, and theme. In the dramatic and narrative poem, rhyme also and especially helps develop character and dramatic structure. To illustrate the relationship between the genre and rhyme, I am doing to draw on two of my long dramatic poems, a meditation, and a short narrative. Manhattan Carnival (Countryman, l98l) is a book-length dramatic monologue in couplets. In his Introduction to the book, X.J. Kennedy addressed the critical climate in which it appeared:

"Each couplet is a lens to look through. No demonstrations of the poet's technique obstruct your view. But those readers to whom the poem may prove a challenge are those most deeply familiar with American poetry. For some, it will be necessary to park a few pet assumptions outside. One such assumption is that there is really no point in writing long narrative poetry in this day and age; that the action of the storytelling has all moved over into the novel. To hold this received idea, however, is to ignore the pleasures to be found in a work that supplies both poetry and drama simultaneously... Another critical assumption -- almost a cliche -- is that rhymed metrical verse cannot possibly "capture present-day American (that is, urban) experience. Such verse (the assumption goes) can't be true to the nervous, disconnected rhythms of city life; to the discontinuity of our lives (whatever that is). Now that assumption is a lot of cant, Feirstein gracefully demolishes it ..."

The dramatic monologue is Mark Stern's who is on a journey back to his ex-wife Marlene. On the way he meets various characters, and gets involved with them in incidents that also characterize the city. Because of the way it can set up expectations and then quickly reverse them, the couplet was an important element in creating the comedy in Mark's actions and attitudes. In the following passage, for example, Mark is trying to re-establish contact with Marlene by calling her from public phones all over Manhattan. But the phones don't work any more than the communication in their marriage did. In frustration he says:

The couplets, with their proximity of rhymes putting pressure on the content, also helps create the intense passion characteristic of Mark, and the energy of Manhattan that he represents. In the following passage toward the end of the monologue, the couplets (along with parallelism and enjambment) form one long sentence that drives Mark's despair to a crescendo. Here Mark and Marlene are standing with her in front of an empty deer cage at the zoo. They hear from someone that the deer have been removed because kids had beaten them with sticks. Then Mark spots the deer and says:

Then the lines continue very differently. The couplets become end-stopped, keying us into a dramatic shift in tone -- from the tumult of internal conflict to a lyrical release that calms the despair and draws the reader into the music that leads Mark to a quietly passionate resolve:

Next time, Feirstein continues with a look at how rhyme schemes enhance dramatic and comic values in "The Psychiatrist at the Cocktail Party. 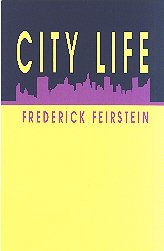 (Amazon) (including the The Psychiatrist at the Cocktail Party)